This article is for MacBook logic board component-level repair professionals, written by IT-Tech Online, the MacBook repair specialist in Melbourne, Australia.

Faulty GPUs are the main cause of graphics issues. This is especially true for the MacBook Pro 2011 A1286 AMD graphics chip. For other MacBook models, this may not be the case.

Any of the following faults can potentially cause graphics issues: 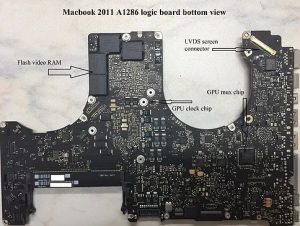 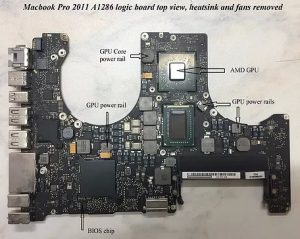 The GPU is the Graphics Processing Unit.  It is responsible for video output on the screen. If it is faulty, you will see all sorts of the abnormal video display or a black screen.

The AMD graphics chip on 2011 MacBook requires four power rails (voltages):  1.0V, 1.5V, 3.3V and variable core voltage 0.75V to 0.9V. If any of these power rails are missing or unstable this will cause the GPU to malfunction. In this case, if you replace the GPU, you are getting rid of a perfectly good GPU in vain.

Graphics mux (GMUX) is Apple’s unique design on 15” and 17” MacBook Pro 2010 to 2012 models. Apple’s OSX uses the GMUX chip to automatically switch between the Intel’s integrated graphics chip and AMD’s dedicated graphics chip. A faulty GMUX chip usually causes a black screen but sometimes can cause other graphics symptoms.

The GPU uses an 8-lane or 16-lane PCI_E Bus to communicate with the CPU (Central Processing Unit). Failure of any of these lanes will cause GPU malfunction.

The GPU uses LVDS or DP Bus to communicate with the LCD screen. A partially failed LVDS Bus can result in lower display resolution, vertical lines on the screen, a darker screen, and so on.

The clock is used to sync the GPU internal modules and external communication buses. A missing clock will cause a black screen.

OSX does not directly communicate with the GPU. To perform graphics processing, OSX calls the GPU drivers and the drivers then call the routines (machine code) stored in the BIOS chip. The drivers and routines are model-specific which are provided by the GPU manufacturer. Sometimes a GPU driver issue turns out to be partially malfunctioned BIOS, caused by a problem within the chip itself or the codes stored in it.

Got a MacBook Pro graphics issue? We can fix it in 2 days. We are based in Melbourne and offer postal Mac repair services to customers Australia wide.