How do you repair a MacBook (hardware)?

There are many reasons a MacBook can malfunction. The most common one is in the case of water damage. Most of the time, we will need to repair a MacBook logic board in order to restore it. These are the steps to a usual repair.

Also known as basic repair. A MacBook consists of the following parts:

The objective is to identify the faulty part(s) fast. 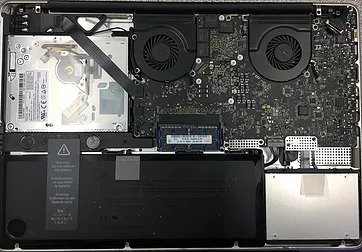 1. We open the bottom panel and conduct a visual inspection to determine if it is safe to power up. We never power up a liquid-damaged MacBook without proper treatment since it may result in more chips damage and make the repair work much harder.

2. Connect a special power unit with a digital display showing the electric current being drawn from the power supply to the MacBook. If an over-current is found we cut off power immediately to prevent further damage the MacBook (as this finding indicates the logic board has highly likely shorted circuit).

6. If the logic board can be powered up, we test all its expected functions to see if there are any remaining defects that can be found. Any malfunction will require the next level of repair.

7. This part-replacing type of repair is entirely dependent on the availability of the spare parts. If there are no spare parts then there is no fix. All spare parts can be obtained from supply sources except one: Logic board. Find out why Here.

8. If a faulty logic board is found in your MacBook, Apple Authorized Service Centres and 99.9% of the computer stores will tell you that your MacBook is non-repairable. Apple genius bar takes a slightly different approach. If your logic board is under warranty, it will be sent overseas for repair (Foxconn China, manufacturer of logic boards for MacBook, iMac, iPhone). If the board is out of warranty, you do not have choices but have to buy a new Mac otherwise you will end up with an “Apple genius bar certified dead MacBook". There is a huge value difference between choosing to buy a new MacBook and to repair a MacBook logic board.

Also known as manufacturer repair. At this level, we are working on individual logic board components (or chips) such as CPUs, GPUs, ICs, transistors, resistors, capacitors and so on. The objective is to identify the faulty chips among the many thousands on the board and then replace them without damaging the surrounding chips. We repeat this process until all faulty chips are found and replaced, and all the functionality and stability tests have been passed.

In one sense, it is like a meticulous forensic investigation. In order to perform the task effectively and economically, one needs the electronic knowledge, detective reasoning skills, micro-soldering skills, experience, proper equipment and most importantly: an understanding of the “core" design of the Apple logic board. Unfortunately, there are very few companies that can perform this task effectively – and even less still in Australia. We are proud to be one of them. Instead of replacing your entire logic board, we will replace the burned or failed components on your existing logic board with new ones. Your logic board contains thousands of interconnected components. It makes no sense to throw the entire thing away because of just one faulty component!

Logic boards with a physically cracked PCB board or burn holes are not repairable due to the board 9-layer circuit design interconnecting the surface-mounted components internally.

Logic boards with faulty CPUs are also considered as being not economically repairable. These fatal types of damage account for around 5% of damaged logic boards. The majority of faulty logic boards including faulty graphics chips (GPUs) are repairable but many of them are being dumped as electronic waste in Australia.

Every time we repair a MacBook logic board, we prevent needless electronic waste which has less impact on the environment. Please take care of our environment by supporting component level repairers like us and give your beloved MacBook a second chance to serve you.

2. How does my MacBook power up?

3. What’s the difference between a graphics issue and a faulty GPU?