If your MacBook Pro has symptoms of black screen, white screen, grey screen, vertical lines on the screen or just stuck on the loading screen, you most likely have a MacBook Pro graphics card issue. The photo below shows a typical screen display of MacBook Pro GPU failure. 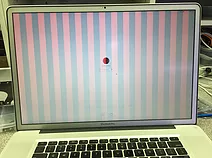 If your MacBook Pro has horizontal lines on the screen, you most likely have a faulty screen or connector. Your MacBook Pro GPU should be fine. IT-Tech Online is a MacBook repair specialist, we can diagnose the problem for you and provide a free quote.

MacBook Pro 2011 GPU failure is widespread on the 15′" and 17" MacBook Pro 2011 models. We have developed a hardware solution to solve the problems permanently. We will remove the poor quality AMD GPU and rewire the LCD screen directly to the Intel intergraded graphics chip.

Since we rolled out this MacBook Pro 2011 GPU fix service in December 2016 when Apple ends the GPU recall program, we have done more than a thousand units with no single return for a second repair, no firmware upgrade issues, no PRAM reset issues and no software compatibility issues. It is the best permanent solution to the widespread 2011 MacBook Pro graphics card issue.

There are a few options for the MacBook Pro 2011 GPU repair. Please contact us along with your MacBook model and fault description. Our experienced staff will call you to discuss your options in details.

This MacBook Pro 2011 GPU fix is to replace the AMD graphics chip. It is impossible to use the newer GPU on the old logic board without radically altering the logic board design. The economical and practical option is to use the original GPU to replace the faulty GPU. In fact, it is the temporary solution adopted by Apple in its faulty GPU recall program in 2016. The repaired MacBooks will fail again between 6-18 months due to the poor quality of the GPUs. We have a better solution, therefore we do NOT recommend replacing the GPU.

This MacBook Pro 2011 graphics card fix is to remove the GPU and connect the LCD screen directly to the Intel integrated graphics chip. Your logic board will use the more reliable Intel graphics chip all the time. This is the best and permanent solution to fix the MacBook Pro GPU failure.

The repaired Mac laptop will run up to 20 degrees cooler, prolonging the life of your Mac computer. There are no noticed differences when you surf the internet, Skype, watch YouTube videos, watch DVD/Blu-ray high definition videos, and so on. However, if you want to play games or do video editing, you Mac will run slower as the intergraded Intel graphics chip is not as powerful as the dedicated AMD graphics chip. The 15" MacBook Pro 2010 also has graphics card problems. This 2010 MacBook Pro comes with an Nvidia GPU. The GPU panic issue is caused by the power management circuit failing to deliver reliable power supply to the video RAM. As the GPU relies on the video RAM to store the graphics data, the GPU will not function properly. The common symptoms are intermittent crash, auto reboot and black screen.

We are very proud of our 5-star rating on Google Reviews and we always work hard to maintain the top rating by providing excellent services to every customer. Check out all our customers’ comments on Google Reviews.

Overheating! The GPU generates a lot of heat under heavy load. The cooling system is responsible for keeping the GPU at its proper operating temperature. If the cooling system partially or completely fails, the GPU will inevitably fail along with it

No. There is no dedicated  AMD or Nvidia GPU chip in this model. The integrated Intel graphics chip is very reliable although also less powerful. You may have a faulty screen or other faults cause the lines on the screen.

Most likely. There is no dedicated GPU chip in this model and the graphics processing capability is integrated into the CPU. This low-end Intel CPU is not reliable. There is no cooling fan in this 12" MacBook, as a result, CPU failure is a widespread problem for this model. The best permanent solution is to replace the CPU and increase the size of the CPU heatsink. A better cooling system is the key to solve the problem.

My 2011 MacBook Pro has horizontal lines on the screen, is this a GPU issue?

How long is the warranty?

All our work is covered by a 90-day return-to-base warranty.

What if I am not in Melbourne?

About half of our customers are outside Melbourne. You can post your MacBook to us and add $30 for return express postage and insurance.

17″ A1297 MacBook Pro 2011 GPU failed. We have developed permanent solutions to solve the problems by removing the faulty AMD GPU and rewiring the ...
Read more

MacBook Pro GPU failures are widespread issues on the 2011 A1286 15″ model. Back in late 2013, we developed the permanent solutions to solve the ...
Read more