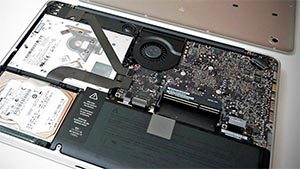 How much does MacBook Pro SSD upgrade cost?

IT-Tech Online offers high-quality Macbook Pro SSD upgrade services at competitive prices of $280 to $580 depending on the capacity of the SSD drives. Our Mac SSD upgrades services include SSD drive installation and data transfer. We will completely transfer everything from the old hard drive to the new SSD drive.

Why do you need MacBook Pro SSD upgrade?

The 2008-2012 MacBook Pro with a non-retina screen came with a conventional spinning hard drive. This old-style hard drive is the bottleneck of your Apple Mac. Every time you upgrade the macOS to the newer version, you will find out that the laptop is slower than before. This is because the feature-rich new macOS requires more computing power. MacBook Pro SSD upgrade is the key to increase your MacBook computing power.

If this sounds like your computer, then you might be thinking about replacing your computer. But why replace your computer when we can perform Mac SSD upgrades for you at an affordable price?

Mac SSD upgrades are easier than you would think! You can now breathe new life into your Mac in one simple step, by replacing its traditional spinning Hard Drive (HDD) with a Solid State Drive (SSD).

Upgrading your Macbook’s HDD to an SDD can boost your computers speed up to 10 times.  Upgrade your MacBook Pro with an SSD drive today and say goodbye to the “spinning ball".

Why should you invest in a Macbook Pro SSD upgrade?

Many professionals agree that by implementing a Macbook Hard Drive replacement you will be ensuring speedier apps, snappier computer start-up times and an extended running life for your computer. In fact, the biggest speed increase that a computer can get is from Mac SSD upgrades.

Swapping your old HDD for a new SSD is a super-efficient and affordable way to improve your computer’s performance speeds by at least 5 times its original speed.

A Macbook Hard Drive replacement is hands down, the best way to improve your computer’s functionality and performance. SSDs are more reliable, durable, energy-efficient and much quieter than traditional hard drives that use magnetic, spinning disks.

Because SSDs don’t have any moving parts they can read and write information up to 10 times faster than traditional mechanical Hard Drives. Upgrading to an SSD, also inadvertently improves your computer’s short-term memory or RAM. Resulting in three main improvements to your computer;

By investing in a Macbook Pro SSD upgrade you will be able to improve your computers read/write speeds, memory size, capacity and reliability.

The way that SSDs are made also ensures that they are more resistant to shock, vibration and movement – making them far more durable than HDDs. This is why most new Macs and the vast majority of all modern laptops now come with SSDs instead of HDDs.

Therefore, Mac SSD upgrades are the quickest, easiest and cheapest way to boost your computer’s performance, in a blink of an eye.