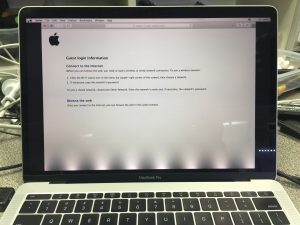 Apple MacBook flexgate repair costs $350-$400, depending on your MacBook model. We provide professional MacBook display repair services at affordable prices. We can fix the Apple flexgate issue on the same day.

What is Apple MacBook flexgate issue?

MacBook flexgate refers to the design flaw of the MacBook screens manufactured in 2016-2017. The backlight cables are prone to be broken due to extended stretch. This problem arose in 2018 and has persisted up until now. Since the nature of this problem only occurred when the Macbook Pro had aged, it was undiscovered at first and was only brought to attention when 2016 Macbook Pro models began to show signs of wearing down.

Apple has taken note of the flexgate issue with the display and launched the MacBook Pro Display Backlight Service Program to service the affected MacBook free of charge. You can find out whether or not your MacBook is eligible for the backlight repair program on Apple’s website.

This extended warranty program is based on the purchase date of the device. In 2022, most Mac owners have found their devices not covered by the program. Apple charges a premium price for a new screen replacement when your mac is no longer covered by the extended program.

IT-Tech Online is a Mac repair specialist in Melbourne. We provide professional same-day repair service for the MacBook flexgate issue at an affordable price.

If Apple’s warranty program does not cover your Mac that experienced the symptoms mentioned above,  you have a few options to get it fixed.

The fix requires micro soldering skills. As many computer repair shops don’t have the skill, it may not be easy to find a local repairer. You may need to post your Mac to other cities. Talk to your repairer to find out what techniques they will use to fix the MacBook backlight issue before sending to them.

Remove the plastic material covering the cable wires and solder fine copper wires to join the flex cable. This is the easiest way to fix the issue, but it is a temporary solution only. The fix won’t last long as the flex cable is still too short for the fully-opened screen. We don’t use this solution.

Option 2: cut off the connector and join the cable to the circuit board with wires

Cut off the flex cable connector,  solder one end of the wires to the flex cable, the other end to the circuit board. This is an improved solution but still won’t last long if you often close and open the screen. In other words, it is still not a professional solution. We don’t use this solution either. Option 3: cut the old flex cable in half and solder a new cable on it

Cut off the old cable in half and solder a new flex cable to join the old cable. Make sure the repaired cable is just long enough when the MacBook display is fully-opened. This solution is the most economical way to permanently fix the broken flex cable. We use this technique. Option 4: remove the LCD panel and solder a new cable directly to the LED strip

Preheat the screen assemble, remove the LCD panel from the aluminium frame and solder a new flex cable to the LED backlight strip. Removing the LCD panel is a high-risk task as it could be easily damaged, even for an experienced technician. Also, this is a labour-intensive repair, and the cost is much higher. This solution is not cost-effective. We don’t recommend this solution.

Before sending out your MacBook Pro for repair, please follow these steps to verify that your Mac is affected by the flexgate issue, especial if you want to post your Mac to another city for repair.

If your screen has a “stage light” effect as shown in the photo on the top of this page, your Mac most likely has the flexgate issue. The dark spots on the bottom of the screen indicate the LED lights are NOT working due to one or more copper traces on the backlight flex cable being broken. Sometimes faulty LED light strips inside the screen could cause “stage light”, but it is not common. Apple uses high-quality LED light strips, and most of them will last for 10+ years.

If your Mac has a black screen, your Mac may or may not have a flexgate issue. Your Mac could have other problems, such as a faulty logic board. Please follow these steps to determine whether your Mac has a backlight flex cable issue or other issues.

How to verify the flexgate issue on my MacBook Pro?

1. Press the power button on the keyboard and wait for one minute.

3. Place one finger on the middle of the trackpad, move the finger towards the upper-left corner.

4. Move the Mac to a dark room. Shine a torch on the screen upper-left corner. If you can see the cursor, then your Mac has a blacklight flexgate issue. 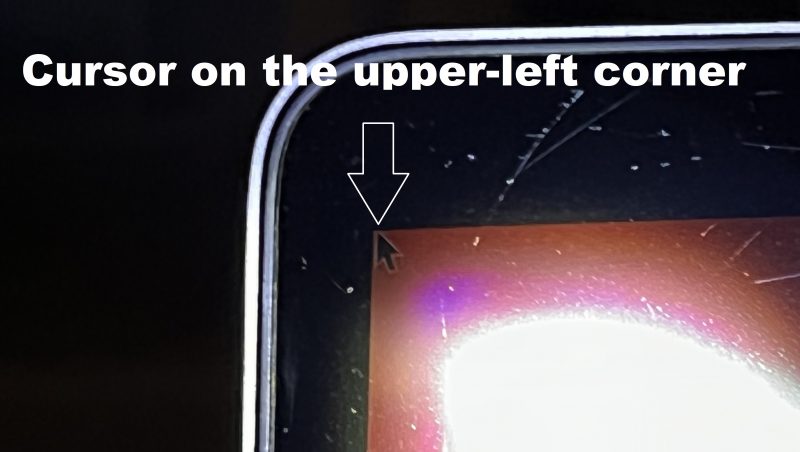 In step 2,  if you can’t see the Caps Lock light, your Mac may have other problems such as logic board failure that are not related to the flexgate backlight issues. If your Mac has a touch bar and the touch bar is on, the CPU in your Mac is working now. You don’t need to test the Caps Lock key. In step 3, use ONE finger only, not two or three fingers, to move the cursor. By default, macOS uses one-finger movement to control the cursor. As you can’t see the cursor move, you may perform this step a few times to ensure the cursor is on the upper-left corner. If in doubt, you can practice it on a working MacBook to see how the cursor moves.

If you can’t see the dim image after repeating the above steps a few times, it does not rule out the possibility of flexgate. It could be that the room is not dark enough, the torch is not at the right angle, the keyboard is not functional, and so on. These factors could affect the result and make the dim image hard to see. If you have difficulty with flexgate verification, please talk to our staff, and we will verify the symptoms and give you advice over the phone. In 2015-16, Apple re-designed the retina screen from scratch to manufacture a thinner and compact screen. One of the significant changes is replacing the hard-wired cable with flex cables. The photo below shows the flex cables connecting the Timing controller board (T-Con board) to an LCD screen in a 2016 MacBook Pro. A flex cable is made of a flexible plastic ribbon with thin flat copper traces attached to the ribbon. Therefore you can bend the flex cable frequently without damaging it. The copper traces transfer power or data from one end to another.

MacBook Pro screen manufactured in 2016-17 came with a short backlight cable. The cable is about 2mm shorter than required. When you fully open the screen, the pressure is built on the joint of the flex cable and the cable connector.

The photo below shows a cracked backlight flex cable from a flexgate MacBook Pro. The crack is near the connector across the flex cable. We have removed the top covering layer to expose the copper traces for illustration. There are six copper traces to control the six groups of LED lights independently. These traces are very tiny. When one or two of the six traces are broken, your Mac will get a “stage light” display.

Sometimes when you close the screen for a while, the flex cable shrinks a bit and re-joins the broken copper traces temporarily. As a result, the Mac screen can temperately display a normal image when you open the screen slightly. When you tilt the screen further, the stretch pressure will pull the copper traces apart, and you get the back screen again.

The webcam flex cable is also shorter than required. It is common to see both backlight cable and webcam cable are broken in one MacBook Pro. Unlike the backlight flexgate, the “webcam flexgate” is unknown to most people. A user who experienced a webcam problem would never think the faulty webcam flex cable caused it. Many users use an external webcam to deal with the situation or don’t use the webcam.

Repairing the webcam flex cable is similar to the backlight cable. However, there are many more copper traces on the webcam cable, and many of the traces are very small. These factors make the repair job harder.